When you realize or get told that one of your friends is colorblind, most probably you remember the term red-green color blind and try to imagine, what this means:

(1) Red-green color blindness doesn’t exist, because there are really two distinct forms: red-blindness (protanopia/protanomaly) and green-blindness (deuteranopia/deuteranomaly). Protan defects are caused by a shift of the peak of the red sensitive cones in your eye towards the green peak, or if they are missing at all. For deutan defects the same is true for the green sensitive cones. And even if the naming sounds like a combination of both, you are suffering just under one of them.

(2) Red-green color blindness doesn’t exist, because if you are colorblind you will encounter problems with colors from the whole color spectrum. There is no such color vision deficiency which is only focusing on certain colors like red or green. The so called confusion lines can give you a quite good understanding of how a color spectrum is seen by color blind people.

(3) Red-green color blindness doesn’t exist, because if you are really colorblind, you really can see only in gray. This is called monochromacy or achromatopsia, which affects only a handful of all color blind people. In this case it doesn’t make sense to talk about any colors at all. On the other side, if you have only problems with your red, green or blue sensitive cones, this isn’t actually color blindness but some form of color vision deficiency. Or as I put it in another article: Color Blindness is not ‘Color Blindness’.

If you still think, that you are suffering from red-green color blindness, have a look at Which Type of Red-Green Color Blindness is It? and learn more about the real type of your color vision deficiency.

Occupational Health & Safety is the industry-leading news magazine, eNewsletter, and website for occupational health and safety professionals. The February issue 2009 will feature the topic “Vision Testing: A Blind Spot In Occupational Safety”, including web links to Colblindor, as a resource about color blindness.

What is the article all about?

The author claims, that vision is often not checked regularly if you compare it to hearing or blood pressure. And this causes that many employees are short sighted, have no depth perception, are night blind, or are suffering from color vision deficiency—unrecognized from their employers—whereas this handicaps can be real safety problems.

As an employer you should ask yourself:

I can’t judge all aspects of the article. But I can judge the part about color vision, which is unfortunately not very well researched. All they say is that color blindness could be a problem for drivers because of the traffic lights. I think this is a bit to superficial. You can find my opinion on this topic at: Colorblind at the Traffic Light.

Anyway, thanks for linking me up.

When people hear that you are red-green colorblind, most of them think, that you can not distinguish between red and green. But that is wrong.

Of course, red and green are some of the problem colors when you are suffering from red-green color blindness. But…

The following diagrams of the CIE 1931 color space can give you a quite good understanding of which colors are problematic for colorblind people. 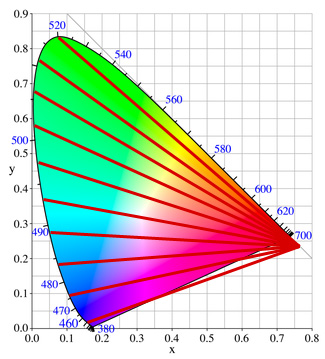 All colors in the direction of the lines might be hard to differentiate. There are three different diagrams corresponding to the three main color vision deficiencies: protanopia (red-blindness), deuteranopia (green-blindness), and tritanopia (blue-blindness).

For the two types of red-green color blindness (protanopia and deuteranopia) the main problem area of colors is really in the axis between red and green. And on this side of the color space, the confusion lines are quite the same for both types. This is why they are called red-green color vision deficiency. But on the left side of the diagram you can see that they are quite different confusion lines which show the problem colors.

If you would like to learn more about color matching and confusion lines you might like to read the article Color Matching and Color Discrimination by Joel Pokorny, a very well known researcher in the field of color vision deficiency.

As you can see from the above diagrams, the whole spectrum of colors is some way reduced for colorblind people. It is definitely not only red and green (protanopia/deuteranopia) or blue and yellow (tritanopia) which can not be distinguished.

The RGB Anomaloscope can be used to check if you are suffering from red-green color blindness or not. Unfortunately it is not possible to differentiate between the different forms of red-green color…

END_OF_DOCUMENT_TOKEN_TO_BE_REPLACED

#01 99% of all colorblind people are not really color blind but color deficient; the term color blindness is misleading.

END_OF_DOCUMENT_TOKEN_TO_BE_REPLACED

If you are designing graphics for a web page you have to keep in mind to make them also accessible to colorblind persons.

The new soft proofing filters for color vision deficiency were developed in corporation with the Japanese Color Universal Design, a user-oriented design system, which has been developed in consideration of people with various types of color vision, to allow information to be accurately conveyed to as many individuals as possible.

To determine whether your document is CUD-compliant or not, step through the following three simple steps:

To comply with CUD, you have to check your document in both views.

If you are a graphic/web designer, don’t forget to check your graphics on accessibility for colorblind users. Photoshop CS4 is one of the tool which can help you to fulfill this task—the color blindness simulator Coblis another (online) one. You might find some other helpful tools on my list of 15 Tools If You Are (Not) Colorblind.

Thanks to Jay Kinghorn and his article on Photoshop CS4: Color Blindness Proofing. You can also find more information on color blindness validation at the Adobe Photoshop CS4 accessibility overview.

Many people who either newly learn about their color blindness or who would like to get a job which requires normal color vision, are looking for a way out. As there is no cure for color vision deficiency, improving color vision with lenses for the colorblind seems to be a nice possibility.

The question arises now, can such colored contacts really help you if you are colorblind?

The ChramaGen: A practitioner report is the most often cited report about visual aids for colorblind people. Unfortunately this source seems to be very optimistic and more like some surreptitious advertising.

It is well known, that colored contacts can only alter the perceived colors but can not enhance the spectrum. For example Dr. Natalie P. Hartenbaum states very clearly that lenses don’t correct color blindness contrary to some of the vendors, which make it look like as they could cure color blindness with their products.

Unfortunately I can not tell you anything about my personal impressions as I have never tried such lenses. But I would like to cite some others who did try colored contacts in hope to find something against their color vision deficiency under certain circumstances or even in everyday life.

Faborito says the following about his ChromaGen lenses (Link):

My life has changed in a way a have no words to describe. Last year i saw red for the first time in my life. Is amazing!!!! You have no idea what is like to see a coke can or a tomato in full brilliant red. It’s spectacular. I used them every day, and for photography are great.

Tabascokid is also sharing his story about the Chromagen lenses (Link):

[…] The thing that is not explained in the brochures is that despite you suddenly having a broader range of visible colours, depth perception and contrast, it doesn’t help in actually recognising the colours. When I attempted to edit skin tones and subtle casts, I was still just as much in the dark. The primary colour looked lovely and punchy but I never really had issues with these anyway. Tones and hues were as confusing as ever. My brain still couldn’t get the differences.

Chris made the following experiences (Link):

With ChromaGen only one tinted lens is worn, this provides colour contrast but I found it distracting as I was unable to coordinate the contrasting visual data. Although I passed the Ishihara Colour Test with this system, I was still unable to name colours. The ColorView system changed the colour spectrum but at the expense of darkening the visual spectrum overall. This system was more akin to wearing sunglasses than anything else as I still was unable to identify colours confidently and still failed the colour test.

I did have some improvement when testing them with the Ishihara test. The opthamologist with Colorview had me go outside in daylight to use the lenses and many reds that I normally could not see came into view. I did not purchase the lenses because I was more interested in passing a color vision test and felt even with the lenses I would fail.

Now judge yourself if you wont to give colored visual aids a try to improve your color vision. But you have to know, that not one product can cure color blindness but only alter your color perception.

Read more details about colored contacts and glasses at Improving Color Vision with Lenses for the Colorblind.