LEDs are great but very troublesome for someone suffering from color blindness! I don’t know why, but the colors used with LEDs are in most cases indistinguishable for me and therefore not usable the way they should be.

Here comes my story which happened just the other day and shows one more time, why colorblind men are suffering under LED lights:

I bought a new wlan router and when I started it up all the lights turned on, one after the other. So far everything ok. But then the connection didn’t work and the story begins.

As I couldn’t tell what colors they were I asked my not colorblind son who is 3.5 years old. He started naming the colors from the left side: “Yellow, yellow, red.” — “What?!”

I asked my son again and again. Telling him that he might mix up the colors. In the end he really was mixed up and started to say what I wanted to hear from him, that all the lights show the same light…

Now here comes the funny part of the story: As I couldn’t make it work I called the support line. A nice women tried to help me to fix the problem. When she asked for the colors…. Well, I said for me they look ok, but my son tells me something different. She couldn’t really believe that I couldn’t tell her if one light is red or not. I felt so stupid and I thought she thinks I’m stupid. 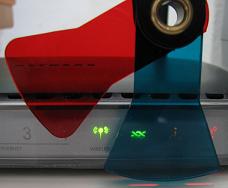 After the unfortunately fruitless telephone call I remembered my little tool Seekey. And this time I thought: “Wow! My son is right, I’m wrong, and I’m really so stupid.” Through the Seekey I could see that there really was a difference between the lights. I still couldn’t tell the colors, but at least knew that there is something going wrong.

Isn’t this incredible. Just some little LED lights can make your time sometimes so frustrating. I still can’t tell if the lights are red or yellow. And if you say they are green, I would believe it. — And again my request: If you are working with LEDs make sure that your colorblind friends can also see the colors!

Dear readers,
Tell me and be honest: can you see a difference in color between this picture and the first one? – I definitely can not.

By the way, the story with the broken router was done after a few more calls and a whole afternoon of searching for the bug.

PS: I asked my son one more time to confirm, that the colors are really different. He said: “Yellow, yellow, red” and smiled at me… And hey, my wife just said she would call it green-green-red. Now if even the not colorblind aren’t sure how can I ever be sure? :-)